You may want to consider buying an alpine snowboard from a small manufacturer that can provide excellent personalized customer service, and who can suggest either a standard production board, or a totally custom design.

In addition, each length comes in multiple stiffnesses: extra soft (for the 161cm length), soft, medium, hard, or extra hard (for the 175 cm length), based on the rider's weight. If you are on the borderline between two stiffnesses, then chose the softer flex if you ride mostly on icy slopes.

Several aspects of the ExtremeCarving technique dictated the design of the board:

An all-mountain board is not suitable for EC, since:

The SWOARD is unique for several reasons:

For these reasons, reviews/evaluations of the board are valid only if:

The board is lengthwise symmetrical: the inserts, flex, torsion, camber and sidecut shape are all centered, the sidecut is circular, and the board has no taper or setback. The inserts are stainless steel.

The SWOARD production has evolved over time. For the '04 model year and earlier, SWOARD manufactured the ExtremeCarver 3D, which were fabricated at the Duret factory. The 3D model had these characteristics:

In '06, the SWOARD team switched to the Virus Factory for production, and made the ExtremeCarver 2D. Starting in the '08 model year, they shifted production again, so that the board is 100% manufactured by Nidecker. The SWOARD 2D uses a cost-reduced version of the carbon ATC Matrix, called the ATC Matrix 2D. The ATC Matrix 2D still acts as a torsion distribution device for great edge hold. The flex pattern of the 2D and 3D are nearly the same, but the 2D has a bit less edge hold on ice at high speeds, and mainly affects the heel side turns when doing EC carving. The 2D is also less lively than the 3D, but a bit more comfortable to ride. Differences between the SWOARD 2D and SWOARD 3D:

There are a few minor changes for '07:

The ExtremeCarver will not likely benefit from Titanal, because the board must constantly flex into a very short turn radius, which may over-stress a metal board.

See the television interview (in French) with the SWOARD guys.

Several companies have copied the ExtremeCarver dimensions, however none of them have the ATC Matrix:

For 2006, Donek started producing the Pilot, a lower-cost, entry-level carving board with more flex for women and smaller riders. It is proving to be quite popular, and may be the first sign that hardbooting is growing beyond a niche sport.

Coiler offers SuperBoard dampening for good performance on ice. He is still experimenting with Titanal, but the board prototypes are not yet durable enough to be sold in production runs. If and when the Titanal boards are available, it will be essential to use a protective gasket underneath metal-base bindings to preserve the warranty, because otherwise the Titanal on the topsheet may delaminate. The Titanal board has a softer flex between bindings for better edge hold on ice, and is primarily intended for rutted-up race courses. In 2005, Jasey-Jay won two gold medals at the world championships in Whistler, British Columbia on a Titanal Coiler. Here are some of Jasey-Jay's pitches for Coiler:

Chris Prior makes boards that provide a lot of tail spring. To get the best performance out of these boards, it's best to use a technique that loads the tail like a trampoline. 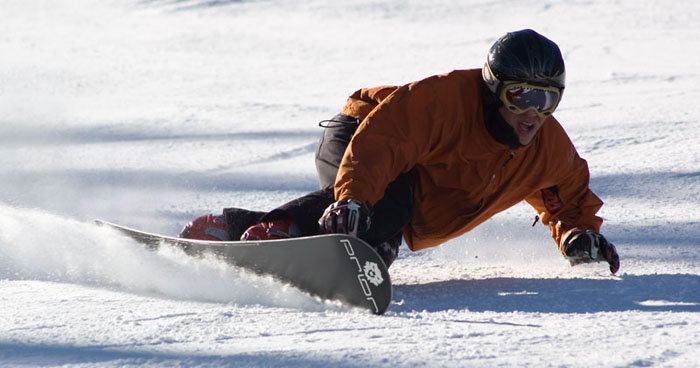 Jim rails on the Prior

The 4WD (also referred to as the 4x4) is a versatile all mountain board with great float in powder, but also excellent carving performance. It's a tad narrow for softboots, but works great with any hardboot setup.

Prior holds demo days at resorts in Canada, Colorado, and the Northwest. Check the website for the demo days schedule, and be aware that this schedule changes often, at the last minute. Or stop by his shop in Whistler and pick up a demo ($25/day). Several stores rent Prior boards, including Fanatyk Co. at Whistler (more than $25/day). Prior has also OEMed for other companies. The Prior factory also has tours; call them up and reserve a timeslot.

If you are looking for a custom BX board, you can get an ATV (if you have smaller feet), or get an ATV with a wider waist, or an modified MFR.

The SL, GS, and SG boards are available in one of three stiffnesses, based on rider weight. The boards have great edge hold on ice, are immune to chatter, and have very high stability at speed. The performance characteristics are achieved with an elliptical sidecut and a flex controlled by a carbon fiber butterfly pattern on the topsheet. Madds have forward-loaded camber, which requires a more aggressive carving technique and takes a bit of getting used to. The setback on the 158 and 170 is quite high. More details:

Info on the older Madds:

The Madds have a few distinguishing characteristics:

Another tidbit: Madd often has insanely good early-season sales, around Thanksgiving. Be sure to get on their mailing list. 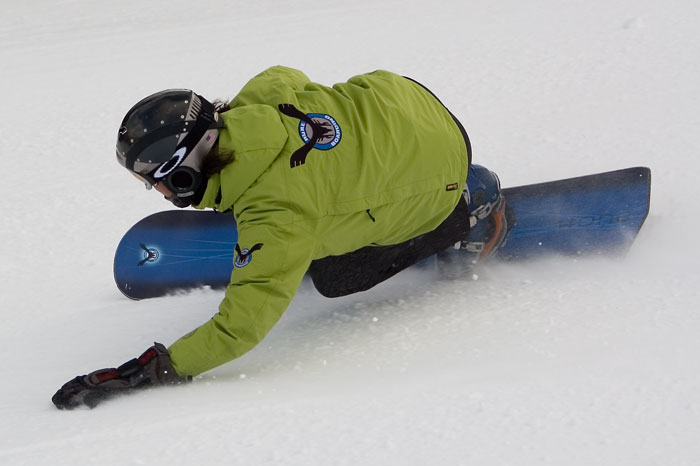 The #one is available from PureBoarding. It is an asymmetrical carving board designed specifically for their style of carving. It is fabricated by Kessler snowboards in Switzerland and comes in three lengths:

According to Jörg, the boards have medium flex with high torsional stiffness, and are softer than many alpine boards on the market. The tail is slightly upturned, which makes it easy to ride switch. The board was designed with a wide waist to allow for lower binding angles. They typically use binding angles of front: 55º / rear: 20º-30º, allowing the rider more rotational freedom, which is required for their eurocarving style. The price is around $1100 USD. 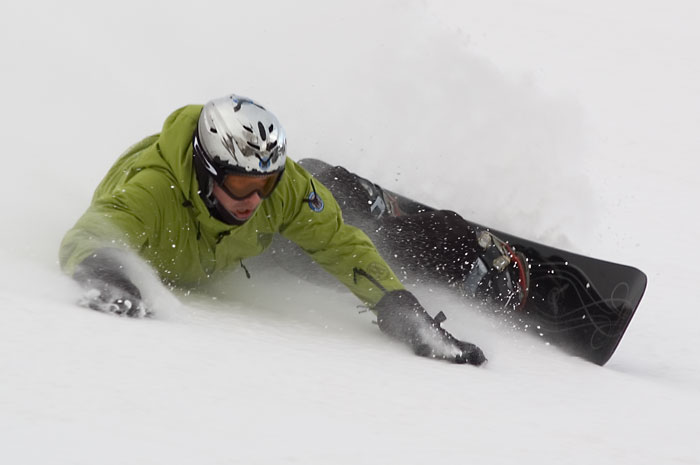 Mike rails on the TWO in Aspen.

The TWO is the second board from PureBoarding. It's also called the "Black Betty." This time around, it is a symmetrical board. Initially, it was available only in a 158 length, but now it comes in three lengths:

Sigi has started a snowboard company, and he's selling race and all-mountain boards, including one that has Titanal. The Speed model is highly specialized for a race course, with a soft flex, a pointy-shaped nose that is supposed to glide over crud, and up to 11mm of taper. Sigi mentioned that the boards are manufactured in Carinthia, which means that Elan is the likely factory.

R.A.D-SE : A design with a shape similar to the Kessler. Made in Sweden. 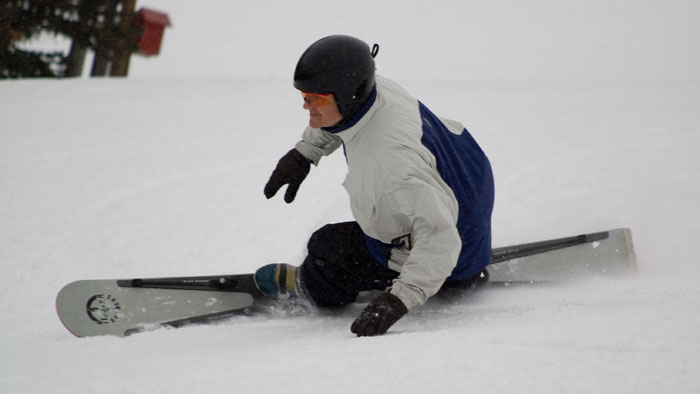 Bryan rails on the Tinkler board.

Tinkler is previously known for the Tinkler Plate, a butterfly-shaped plate that is mounted on top of a snowboard, to give it more dampening. Recently, Tinkler now manufactures boards that have both a carbon fiber butterfly pattern as well as SnowStix, which are rods mounted on the front and rear of the board to provide more stiffness for very long boards.

If you decide to get a board custom made, you call up the guy who will press the board, and tell him your weight, height, foot length, skill level, intended terrain, and riding style. Based on this, he will draw from his considerable experience and conjure the perfect board shape/flex/stiffness for you (it's just like talking to a phone psychic).

If you have big feet, or if you like to carve with low binding angles, you will need a wider board to prevent boot overhang, in which case you should consider going custom. You can also go custom if you want a board with a weird combination of parameters. Want a really long board with a really small sidecut radius? Go custom.

In addition, you can bring life to even the most unnatural science experiments, like Zie Scalpel™, a board with an abnormally long effective edge, or freaks of nature like a 228 cm board with a 19.5M radius.

If you don't go for the custom made option, bear in mind that production boards from different manufacturers have very different characteristics, so there is no rigid rule of thumb for how to select a board. On top of that, the same model of board can change characteristics from one model year to another: The Nidecker Custom GS, F2 Speedster, and Donek FC have gotten a bit softer. The Volkl RT now has a stiffer nose.

Other board manufacturers that currently make carving boards:

Boards available only in Japan:

PureCarve was founded as a small, carve-dedicate board company in Aspen that has since disbanded, but you can sometimes find the boards used. They fabricated the Maverick 175 (11.2 M sidecut), a board designed for their style of carving. It is wider and softer than most race boards. At the time it was sold, it had an uncanny resemblance to the blue-topsheet Rossi 173 (probably the Shannon Melheuse Pro-Ride). The Maverick is a good carving board, despite some minor delam problems. PureCarve also produced a rather wide all-mountain board, the Joey Cabell:

The last year for the Burton alpine line in the US was 2003. Burton continued to manufacture boards under the R.17#Addicted line in Japan for '04 and '05, but for '06, Burton has pulled out completely. Since Burton no longer makes alpine gear of any kind, they will not be able to replace broken gear, even if it is still under warranty. Some older Burton gear is sold on Chris Klug's website:

Unlike a monoski, which has bindings side-by-side, the Skwal has bindings mounted inline, at angles between 86º and 90º. It is around 12 cm at the waist, feels like a slalom water-ski, and allows very laid-over eurocarve-style turns. With binding angles near 90º, the heel side and toe side feel much more symmetrical than a snowboard. Skwal does not have a distributor in the US, but sometimes Skwals are available used on eBay. Skwal factoids:

There are a few Skwal resources:

The Teleboard is an inline carving ski that uses telemark boots and bindings. You have to tweak the bindings so that your back knee is tucked directly behind your front. The back binding provides heel lift, and allows your back foot to flex at the ball for high response. The Teleboard is generally easy to learn, and you can either carve on the groomers or go through moguls on it. They also make the "168 Pipe Dreamer," which is for the half-pipe. Teleboard USA offers demo rentals on the east coast, and at Arapahoe Basin in Colorado. Other links: