You may want to consider buying alpine snowboard bindings from a small manufacturer that can provide excellent personalized customer service:

These bindings are extremely durable. The baseplates on both are made from 7075 aircraft Aluminum – the strongest and most expensive Aluminum alloy readily available. As a side benefit, they both qualify for duty-free status under NAFTA.

Catek bindings are a boon to people who want to independently adjust the cant, lift, and binding angle. In particular, Cateks may be your only option if you prefer a unique stance, or if you are knock-kneed or bow-legged. If you carve in ski boots, you probably need the flexibility of Cateks to get your knees where you want them to be. They are also bomb-proof, made from sturdy machined aluminum. Catek manufactured three versions of highly-adjustable bindings:

Starting in '06, Catek discontinued the older models, and now sells the OS2, which offers more flexibility when setting the binding angle by eliminating the need for a divot hole ring. See the guide to setting up Cateks. 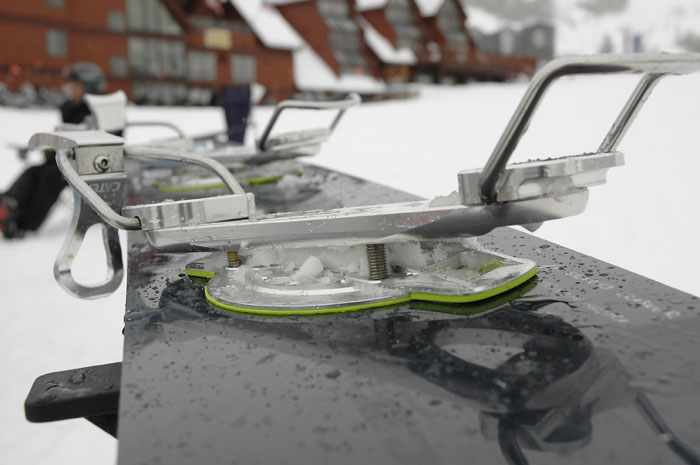 The first model year of the OS2 bindings offered a disc that accommodated both 3D and 4x4 insert patterns. However, starting with the 2nd model year, the bindings come with discs that accommodate only one or the other. If you want both, you need to buy a disc kit for $69.

Some guidelines apply to all models of Cateks:

The amount of isolation you get with Cateks depends on the model. The diagram below shows a cross section of two models: An '02 World Cup, and an '05 Olympic. The drawings are to scale. They show the geometry before the screws are tightened, and before the True Flex Disc donut ring gets compressed.

Catek introduced the Catek Freeride binding in '04, a version of the Olympic that uses the same canting mechanism. It is highly responsive, and the binding of choice when riding stiff softies on a wider all-mountain board. When originally introduced, the binding came with respectable straps and a good highback, but some riders decided to keep using the straps and/or highback from their existing soft bindings, primarily out of personal preference. However, the after-market straps of choice were from the Nidecker Carbon 900 bindings. In response to this trend, Catek started selling the Freeride Pro in March 2004, which features straps from the Nidecker Carbon 900. All was good, except that the Nidecker toe strap was a bit too short when used on the Cateks. So Jeff sent out free toe strap extensions to all previous customers (that's service), and now sells the Freeride Pro with longer Nidecker toe straps. Facts about the Freeride series:

For 2007, Catek is introducing the FR2, which uses the new OS2 powerplate design. The bindings will be available later in the season, and details will be added then. However, there is one quirk related to these bindings: They come with discs that are compatible only with the 4x4 insert pattern. If you want to use them on Burton boards, you have to buy the OS2 disc kit for the 3D pattern, then use the OS2 discs with the FR2 binding. This work-around has to do with legal agreements between Catek and Burton.

Bomber bindings are stiff, heavy duty bindings for carving. Previous to '04, Bomber sold the Trench Digger (now called the TD1). For '04, Bomber discontinued the TD1, completely redesigned the bindings, and started selling the TD2. For both old and new models, the bindings are adjusted by selecting between one of three cant/lift disks that come in angles of 0º, 3º, and 6º. Previous to '04, the cant/lift disks were mounted with the slope of the disk in the direction of the long axis of the board, and provided limited combinations of both cant and lift depending on the angle of the base plate. With the TD2, the cant/lift disks can be rotated so that their slope faces any direction, allowing a wider range of cant/lift combinations. This adjustment is handy because a lot of riders prefer to have only lift on one or both bindings. In addition, the TD2 model allows much greater control over the stiffness because the binding rides on top of an interchangeable urethane ring, available in different durometers. This design contrasts with the older TD1 models, where the binding was rigidly attached to the board, and two additional bumpers between the board and base plate added minimal flex. Bomber Trench Diggers come in either regular or Intec step-in flavor, with the step-ins somewhat stiffer than the regular style. The step-ins require Intec heels that replace the heels on your hard boots.

If you attempt to unscrew the bolts from trench diggers, make sure that you first remove or melt all the snow out of the socket caps first: if not, your hex wrench won't be properly seated and you are guaranteed to strip the hex socket. You can clear out the snow with a smaller hex wrench, an ice pick, or turkey skewers.

If you swap the bindings a lot, the bolts supplied with the bindings will wear out quickly. A set of Bomber bolts will handle maybe 10 binding swaps. Get extra bolts - order a pack of 50 bolts for $10 from The Nutty Company (See the parts list) . They are more durable than the stainless/316 bolts that come with the bindings. Other details:

Bindings for carving require a larger footprint to distribute a large amount of force over a larger area of the board, in order to avoid excessive stress on the board inserts. However, a larger binding footprint will distort the flex pattern of the board, allowing less flex underfoot, and result in dead spots on the board. The Bomber Trench Diggers offer a good compromise by distributing the force through compressed bumpers. Make sure the trench digger bumpers are compressed when the bindings are tightened, otherwise the bindings can rip the inserts out of your snowboard. Compressing the bumpers also keeps the base plate from coming loose. If you are clueless, get the medium hardness (purple) bumpers.

Pressure on the circular cant/lift disks of Bomber TD1s can create circular impressions in the topsheet (usually half-circles). You can bevel the edges of the disks with a file, or you can add a gasket underneath the bindings. If you add a gasket, you have to increase the thickness of the bumpers by a corresponding amount with a washer, and you might also need longer bumper screws and binding screws. Older Donek topsheets are rather soft are more susceptible to breakage from Bombers, so Donek provides a gasket to go underneath Bomber TD1 bindings, along with shims of the same thickness to go between the bumpers and the base plate. You should use these gaskets to make sure your Donek warranty remains valid. If you make your own gasket, you can use 1/32" material, like nylon, plastic, P-Tex base material, or Delrin. See the parts section. You can also use disposable cutting board sheets. You might also need longer screws.

For carving, there is a lot of discussion on the relative merits of the Catek and Bomber bindings.

Bomber also makes bomb-proof tele bindings, the Bomber Bishop. These bindings have a major benefit for the backcountry: If you are trekking out into the middle of nowhere, you really can't afford any breakage. Every year, Couloir Magazine runs a binding review issue, and does a run-down:

You'll want to use the Bomber Skwal bindings on those really skinny Virus and Trans boards.

F2 makes several hard plate bindings, which are lightweight and offer very good response without the jarring stiffness of Bombers/Cateks. They also have a low profile, which allows your boots to be close to the board for more responsiveness. For these reasons, F2 bindings are preferred by a lot of pro racers. Plus, they are less expensive than Bombers or Cateks. F2 makes several plate binding models, but carvers should look at these:

Other issues with F2 bindings:

Snowpro bindings are sold in the US by Dan Yoja: 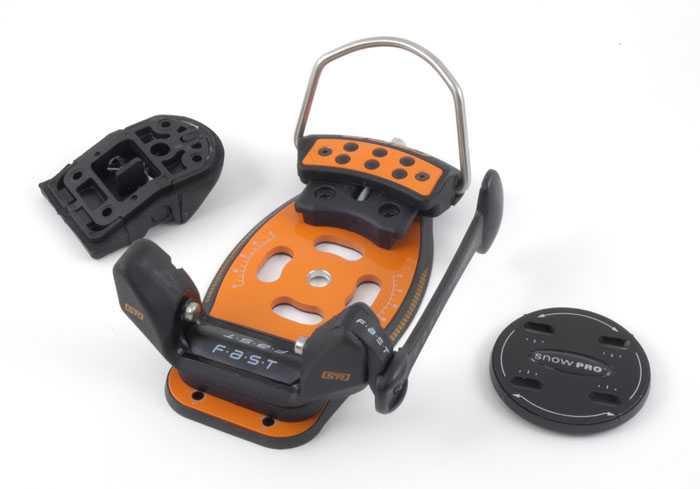 Rabanser Snowboards in Italy Sells the IBEX and Phiokka bindings.

Bindings available only in Japan. Step-in versions of these bindings often use a proprietary mechanism that is not Intec compatible:

These companies no longer make hard plate bindings. You might find older used bindings for sale:

Burton previously sold several hard plate bindings, all of which are made out of plastic:

Low-end Burton bindings, like the Burton Carriers did not always include a cant/lift disk, so if you buy them used, ask if a cant disk is included. The cant/lift disks that came with Burton bindings typically had a non-adjustable fixed angle, always sloping in the direction of the long axis of the board. Some of the cants had removable center metal pieces, so you could swap out a 3D piece with a 4x4 piece. However, the metal centers do not allow conversion between 3D and 4x4. For some of the Burton cant disks, the screws that attach the center metal pieces to the board need to be shorter than the standard binding screws: It's safe to go with 12mm long screws (flat head screws are measured using the entire length, including the threads and the head). When attaching your bindings to the cants, you can use the screws that come with your bindings. The following is a list of cant/lift disks, and the actual measured angles provided by those disks. The actual measured angle seems to differ from the advertised angle:

The "Universal cant" or the "Unicant" (Burton has used both names to describe the same thing) is a set of two stacked disk shims that allow you to dial in a cant/lift angle from 0º to 8º in 1º increments. Unlike the Bomber TD1 cant/lift disks, you can rotate the position of the Unicant on the board in 15° increments to achieve various combinations of cant and lift. The Unicant can be used with many types of bindings and fits both the 3D hole pattern and the 4x4 hole pattern. Unfortunately, the Unicant has a few "issues":

The big complaint with Burton is the 3D insert pattern. For carving, 3 inserts really doesn't feel safe. To add insult to injury, Burton introduced the Uninc Freeride board in 2005 with "2X Technology," a 2-hole insert pattern. Rather than kill off this failed experiment, Burton continued the Uninc.